Shawne Jackson A woman after God’s Own Heart! 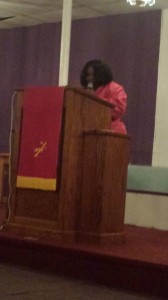 Shawne M. Jacksom is a woman after God’s own heart. She gave her life to the Lord at a young age. She grew up attending Samaritan Missionary Baptist Church. She eventually left and went to Baker College where she started to have her own experiences with God and was baptized in the Holy Spirit in 2003. While in college, she began to have visions and dreams about things and the next minute they started to happen. She led Bible studies at the dorm with her friends. Her friends started to come to her for prayer and spiritual direction. She also attended Abundant Life Ministries International. It was at that church where she was baptized in the Holy Spirit and started to cultivate her relationship with God. In 2006, she moved from Flint to Detroit. She searched and searched for a church where she would be accepted and be able to use her gifts. After experiencing some church hurt she decided that church was not for her. She started ministering to people and praying for people on Facebook. She found an app online called YoVille and built a school called Shamonj Gifts Biblical University where she held Bible classes, ministered and prayed for others online. After being hacked she shut her YoVille account down. Shortly after, she met some new friends and started My Humble Bible Study where she started to teach her friends the Bible at her home. When they felt comfortable, they started taking turns hosting and teaching the Bible. A few years ago Shawne became an ordained minister through Christian National Church. Today Shawne is a minister and faithful member of Grace Fellowship House of Prayer.